Welcome to the newsletter of the Friends of South Brisbane Cemetery (Inc.) 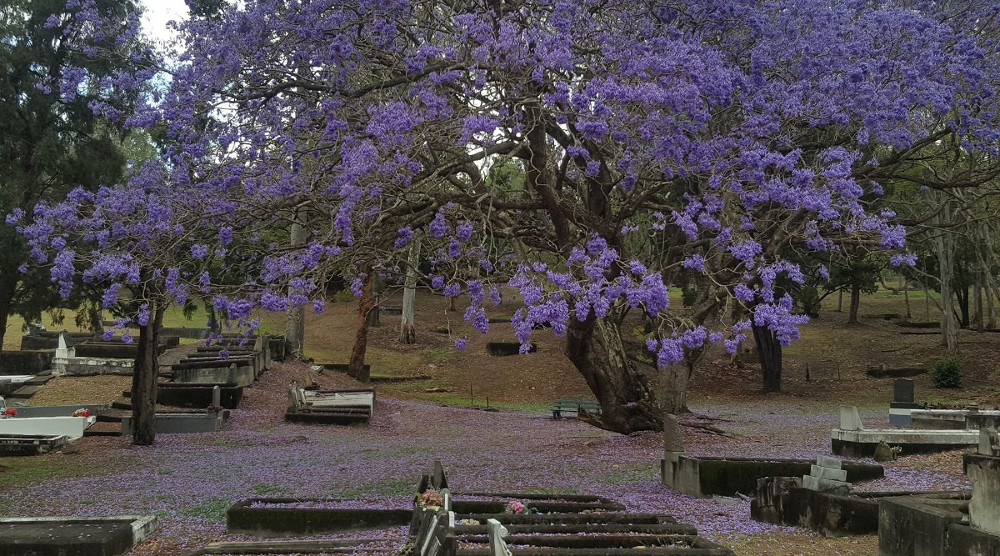 Jacaranda Time!
Yes, it’s jacaranda season again in Brisbane. This is always such a photogenic time to be in the South Brisbane Cemetery, as the lilac flowers carpet the grass and the graves. Get into the cemetery for your photo opportunities while they last! 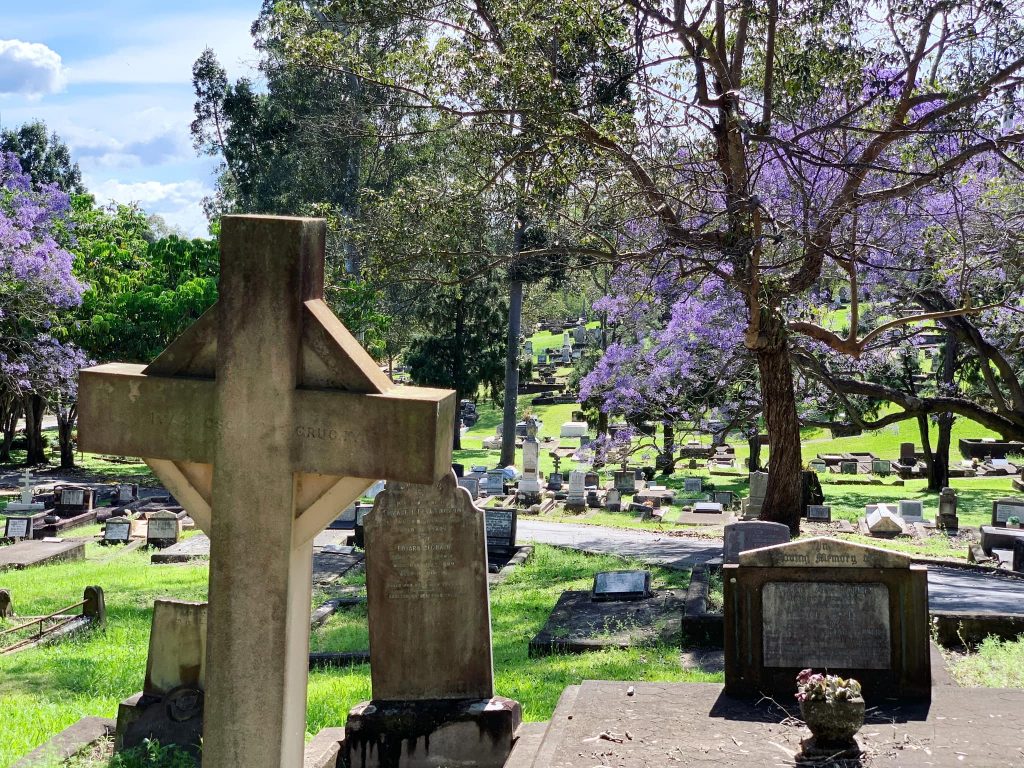 Photo Award
Speaking of photogenic, we were happy to see that the winning entry in the ‘Place’ category of this year’s Brisbane Living Heritage Network Photo Competition features a shot (below) from the South Brisbane Cemetery, taken by Sandie Peters. The Robertson family grave in section 5 can be seen in the foreground as leaves fall and a cyclist comes into shot in the background. A lovely little moment in time, with the stillness of the monuments contrasting with the constant movement of nature and people around them. 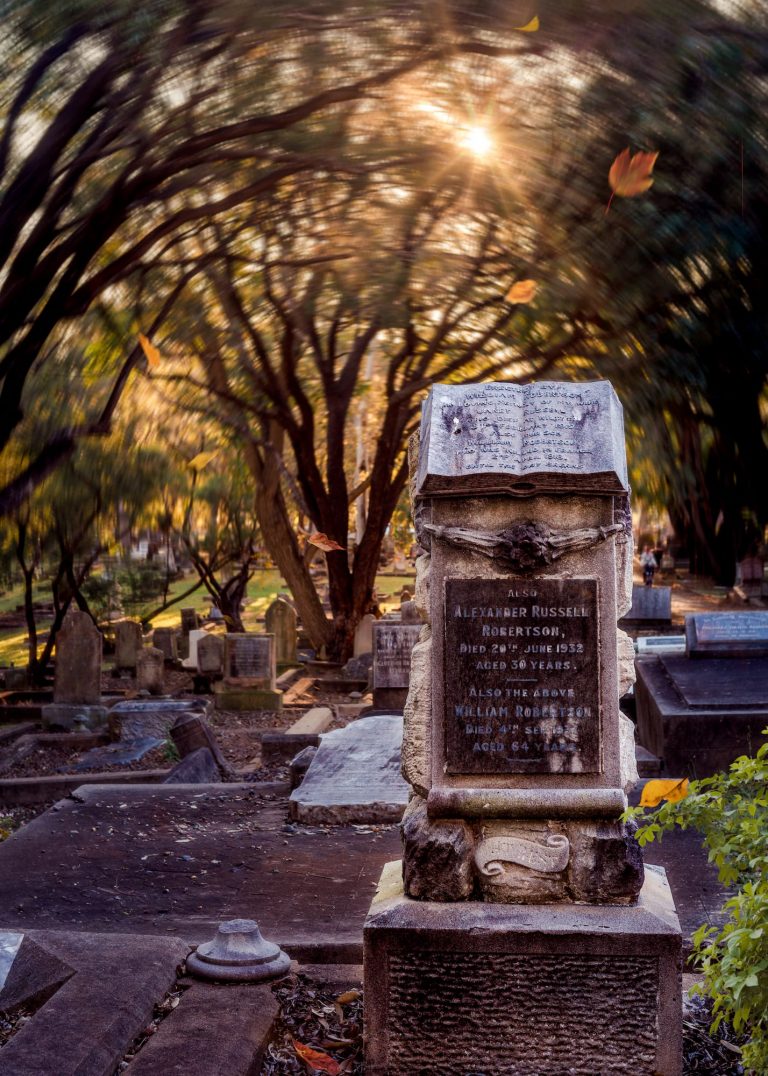 A Tree Falls
A big part of a dead eucalypt came down in the cemetery last month, creating a massive mess and badly damaging at least two monuments. This is a stark and sadly all-too-regular reminder of the importance of good tree management in the cemetery. We love the trees, but dozens of family graves have been damaged in similar incidents in recent years, some beyond repair, and this situation is clearly not sustainable in a heritage-listed cemetery. 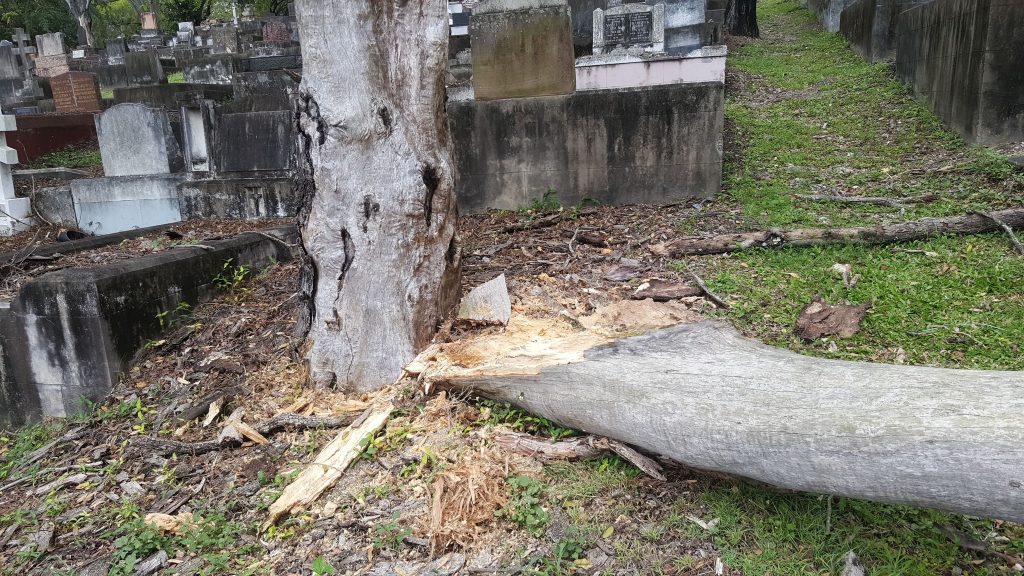 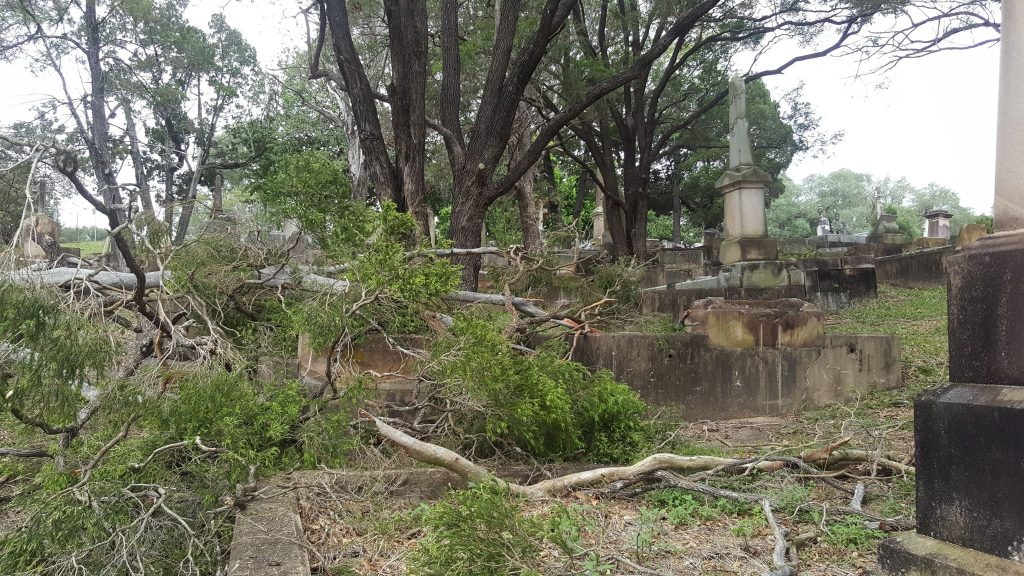 Guardian Angels
The Friends of South Brisbane Cemetery finished up their fifth year of ‘Guardian Angel’ cleaning days on Sunday 6 November. The weather was quite lovely and we had a good turnout. It is especially good to see this group of people become a community, having a great time chatting, laughing, working and eating together. We washed headstones and cleared tree litter from grave tops and paths.

After our usual summer break we will be back in early 2023 for more Guardian Angel days, and as always members of the public are welcome to come along and join our happy band. 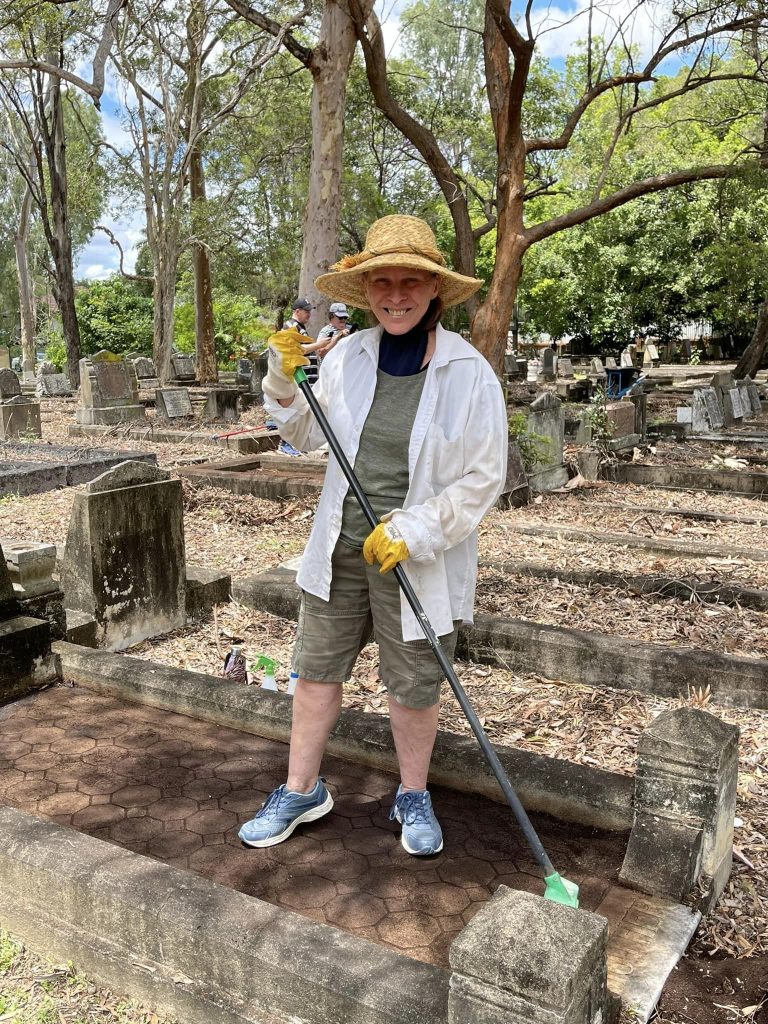 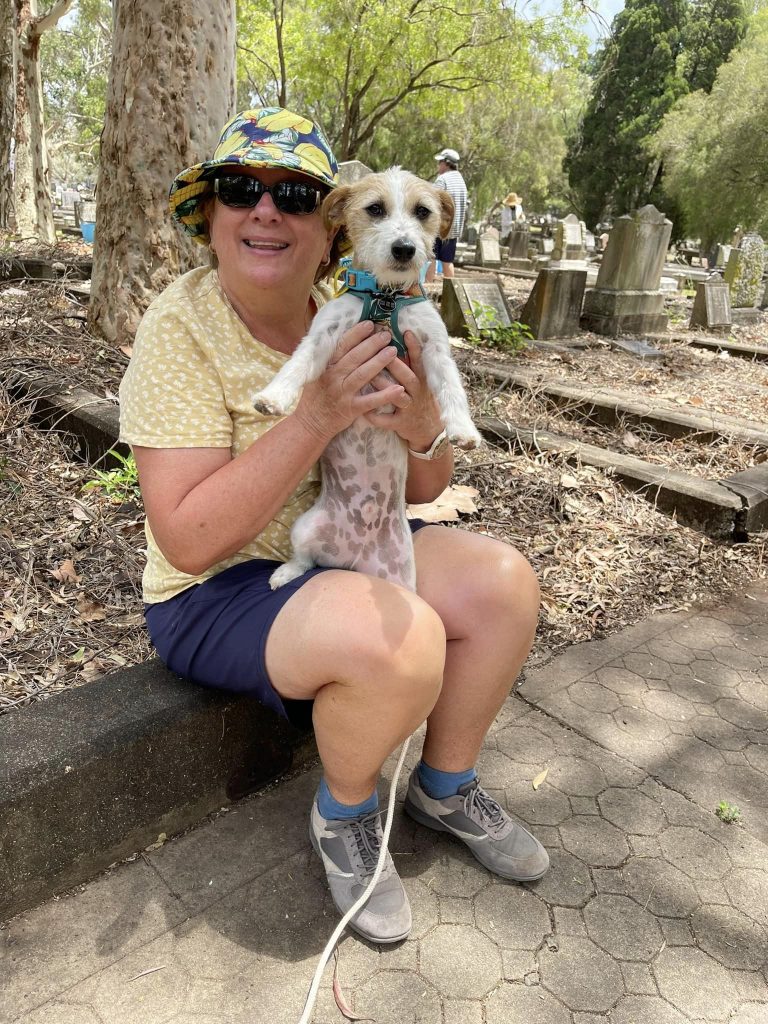 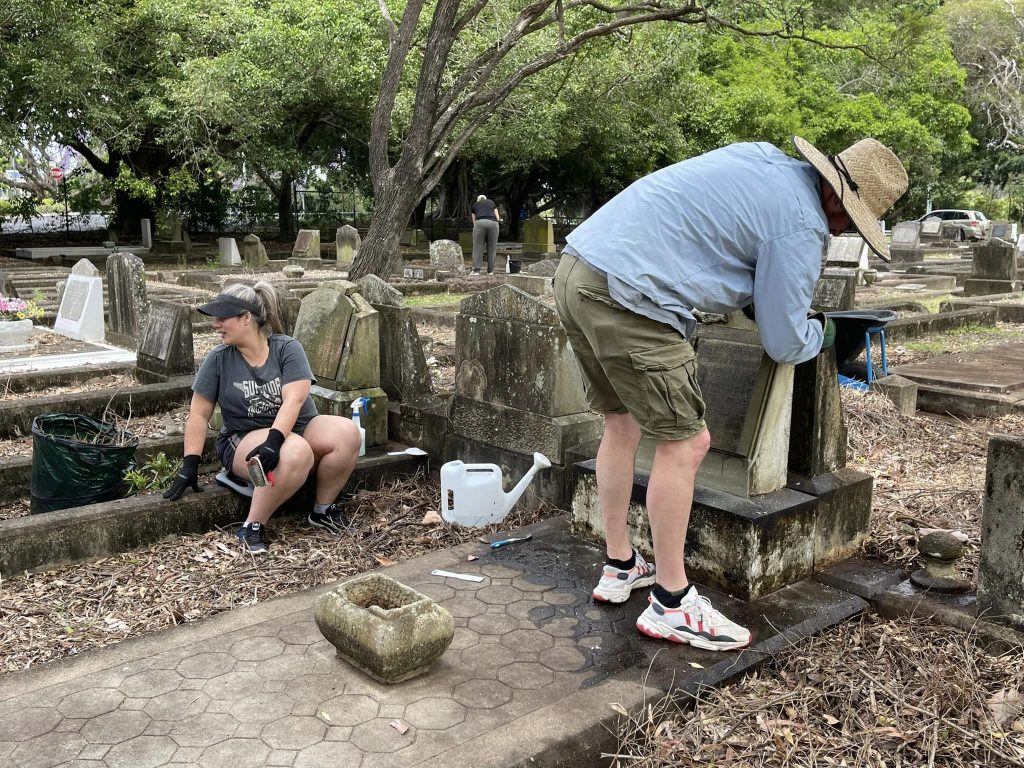 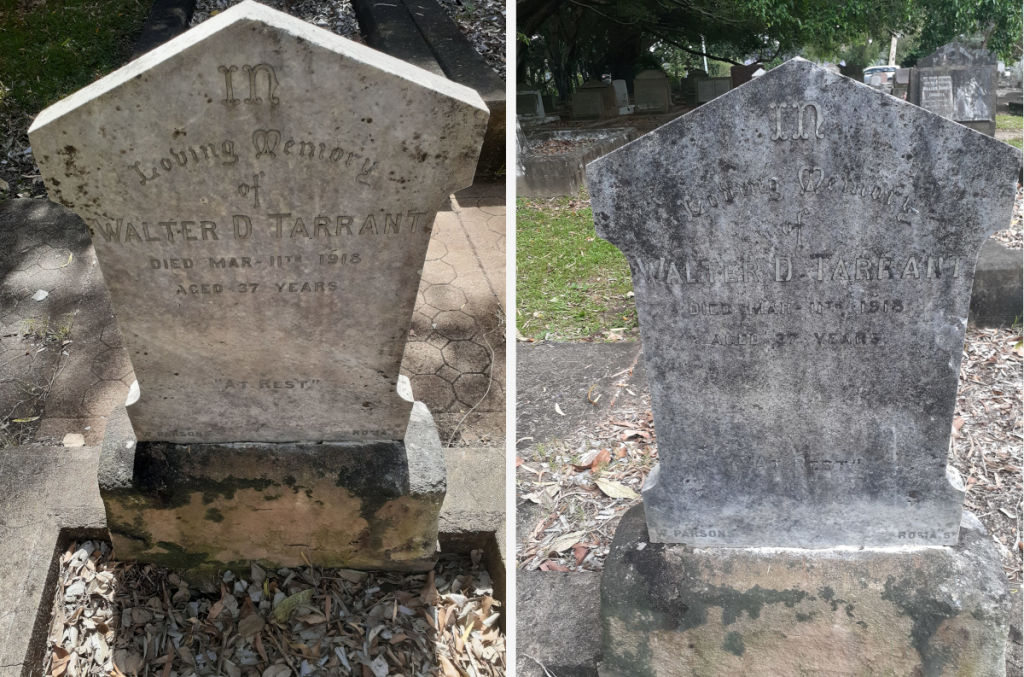 October Cemetery Tours
We have continued our night tour programme in recent weeks with ‘Folklore, Myth and Magick’, ‘Ghost of South Brisbane Cemetery’, ‘Gruesome Graveyards’, and ‘Ghosts of the City’ over at Toowong. As usual it was an absolute pleasure meeting people genuinely interested in stories of the cemetery. 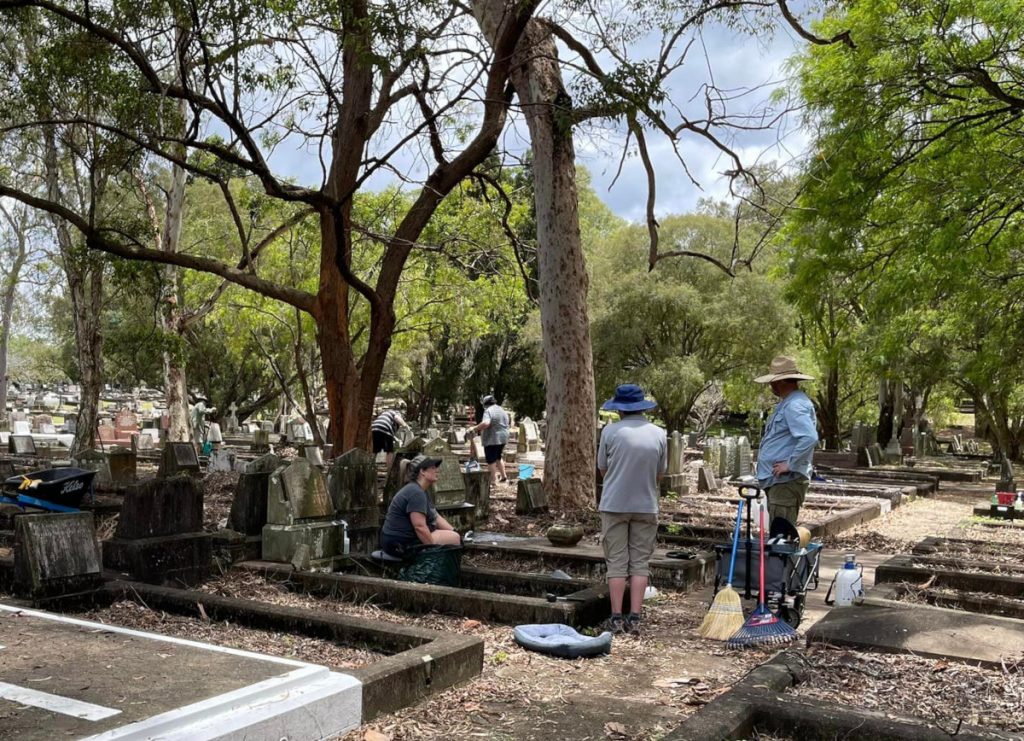 At our November 2022 Guardian Angels Day, as well as occupying myself cleaning graves, I spent some time chatting to our lovely Guardian Angels, including Michelle and Todd and Julie, and getting to know them a little better. As a result, we’ve decided to try something new for our newsletter… ‘Rhonda’s Graveside Chats’, which will feature some of our lovely volunteers. We hope you enjoy it.

Michelle, Todd and Archie (their very sweet and social dog) have been helping with grave cleaning since the beginning of 2022. Sometimes they also bring their children along when they’re available. Their son in particular likes cleaning the graves and Archie loves new smells and meeting people.

They first became aware of Guardian Angels when they attended one of our Toowong Cemetery tours and thought it would be nice to help so they decided they wanted to get involved. They love history and the connection with their ancestors and also enjoy visiting their family member’s graves in various cemeteries around Brisbane. They’ve always cleaned their family’s graves and sometimes visit family graves with their grandparents.
They think it’s nice that graves that have been neglected for so long are now being restored and that the ‘residents’ aren’t forgotten.

Julie moved to Brisbane from Sydney two years ago to escape the high real estate prices. She lives close to the cemetery.

This was only her second time doing grave cleaning but she really enjoys it.

She enjoys the quietness, fresh air and being outdoors and loves the variety of birds that live in the cemetery. She also feels like she’s accomplished something after she’s cleaned the graves. 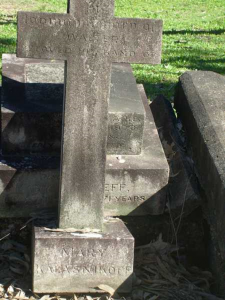 Gone But Not Forgotten: Walter Kalasnikoff - A Russian ANZAC

Walter was born 1 January 1889 in the township of Ostrov, near Pskov in northwestern Russia.

He had worked on ships as a fireman and his chest and arms were covered with tattoos including Russian and American flags and a variety of designs, many featuring an anchor – like a plea for protection. He arrived in Sydney onboard the ‘Star of England’ in August 1914. He was listed as living in the Rockhampton region before enlisting in the AIF in July 1915. In his war records he stated that his religion was Roman Catholic on his enlistment form but on his medical form it was Russian Orthodox. He married his wife Mary in Brisbane – 1918.

Kalasnikoff enlisted in the AIF in 1915 and embarked at Brisbane on the H.M.A.T. ‘Seang Bee’ on 21 October. In 1916 he was nearly blinded in an explosion at Bois Grenier. France, He was medically discharged and invalided to Brisbane with 75 per cent incapacitation, he struggled on for a while. In 1918 his pension was reduced, and he applied for naturalisation, as it was hard to find work without it. His application went through without a hitch and in February 1919 his naturalisation certificate was issued and just about to be mailed when ‘fresh evidence’ appeared. This new ‘evidence’ was the Brisbane Censor’s report that Kalasnikoff, when visiting the Russian Association in 1918, ‘disowned, as a disgrace, his returned soldier’s Badge, as it was a sign that he had fought against his German brothers’. Another of his ‘crimes’ was that a socialist revolutionary, Herman Bykoff (alias Resanoff), who also had arrived in Australia as a fireman, had lodged with the Kalasnikoffs for some time after Kalasnikoff’s return from the front. All this was enough for Kalasnikoff to be branded ‘a Bolshevik (member of a wing of the Russian Social-Democratic Workers’ Party) of dangerous propensities’ and for his naturalisation to be denied. A constable sent to collect information about Kalasnikoff recorded the opinions of an opponent of his, Leo Berk, who said that Kalasnikoff’s ‘wife is well known for her Bolshevik views… Kalasnikoff is led by his wife. He is not a bad man on the whole, but if Bolshevism attained to any degree of success in Australia Kalashnikoff would certainly come out as a Bolshevik.’

This investigation into Kalasnikoff coincided with the red flag riots – the worst possible time for a Russian to come to the attention of the security services. After the riots a friend wrote to Kalasnikoff, who was then in hospital, ‘I was nearly beaten for speaking Russian – by Englishmen. We must be as far from Russia as we possibly can. There is danger for the Russians on every step and corner.’ Nevertheless, the Brisbane RSL gave him its support: ‘Being unnaturalized, he finds it very difficult to secure work’; as well, a Queensland parliamentarian raised his case with the minister for Home Affairs. It was all in vain.

Meanwhile, Kalasnikoff’s health declined, and he died in December 1920 at the Red Cross hospital in Corinda, paying dearly for having once enjoyed his freedom of speech in Australia. 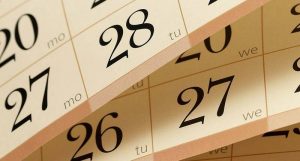 Coming Up at the Cemetery 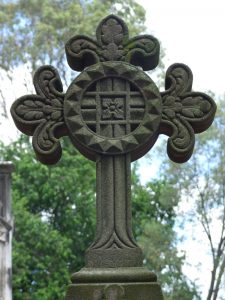 Cemetery Symbol of the Month

Fleuree Cross
This flowered cross with its open, flared ends symbolises the adult Christian. The arms of the Fleuree cross end in three petals, each one resembling the French lily, or fleur de lis.

These petals also represent the Holy Trinity (hence the alternative name the Trinity cross), and are also a popular symbol of the Resurrection. This style of cross can be seen in various forms around the South Brisbane Cemetery.

The cross on the Faulkner grave (above) features ornate fleuree petals.

FOSBC Library
Work has been progressing nicely on our new research library. We are collating, cataloguing and conserving our books, photos, and other documents. During the last Guardian Angels day the library volunteers covered the books with protective coverings.

The end result will be the definitive source of information about the South Brisbane Cemetery, organised to make work easier for researchers now and into the future. 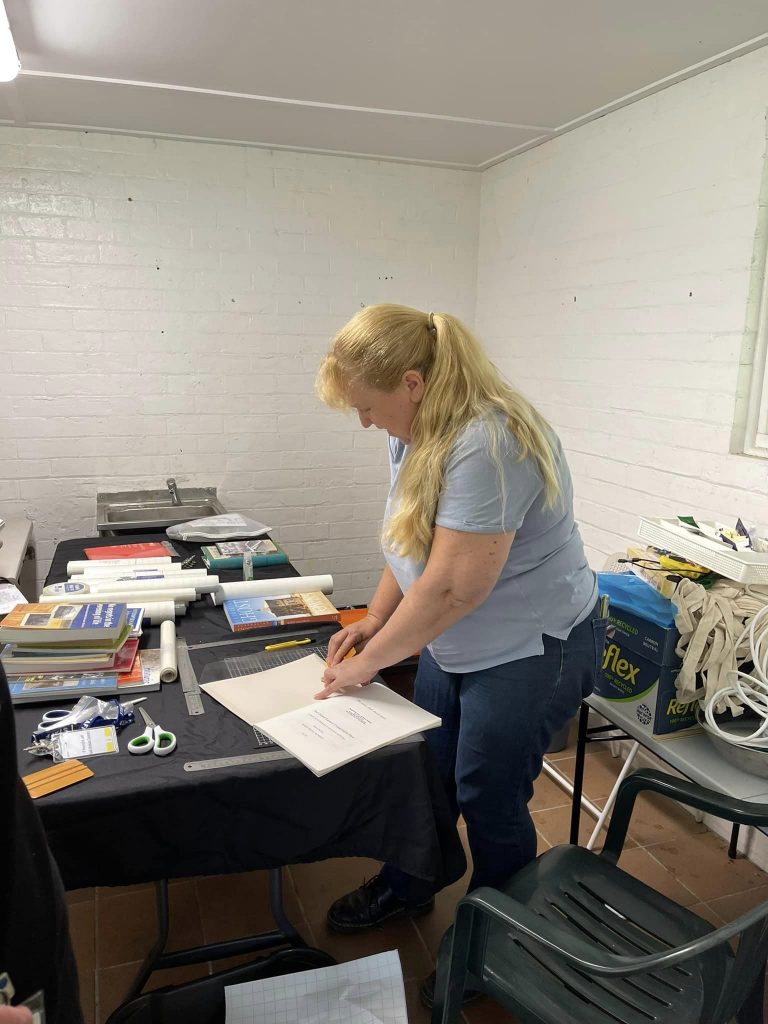 Membership
We have over 80 members and you are welcome to join us and be part of this dynamic community group. Further details can be seen here.

This newsletter edited by C Dawson. All original material ©FOSBC.