OLSEN, John (1852-1926), originally from Norway, came to Australia circa 1873 but lost his sight after a serious accident at the age of 30. Despite this setback he lived a busy life, becoming a successful debater, preacher, and teacher of Braille. He was a long-time member of the Ancient Order of Foresters, and the founder of the ‘Queensland Musical, Literary and Self-Aid Society for the Blind’. After his death the community paid for a tribute memorial stone, which is no longer standing, on his grave. He was remembered as being, ‘endowed with a character and personality out of the ordinary, and the sincere manner in which he worked for the betterment of his fellowmen endeared him to all with whom he came in contact’. John lived at ‘Concord’, Junction Terrace, Annerley, with his wife Dorinda (d.1930). He was a foundation member of the Queensland Authors and Artists’ Association.

Their daughter Agnes (d.1936) married blind poet Jack Baptist Mathieu (1877-1949), who wrote for the Bulletin, was a friend of Steele Rudd, and published the book of verse Backblock Ballads and Lignum Lyrics (below) in 1926. Agnes and Jack are also buried in the South Brisbane Cemetery. 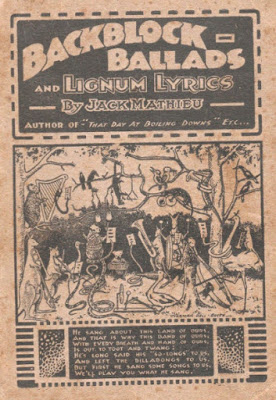 OPPERMAN, Phillip Andreas (c.1886-1955) and Augusta Louisa (c.1887-1955). On the Sunday afternoon of 30 January 1855 a violent thunderstorm passed through the suburb of Moorooka. Phillip
A. Oppermann, a former resident of Waterford who had suffered from heart complaints, collapsed and died at the Keats Street home he shared with his wife Louisa. She left to telephone their only daughter about the event, but on her way back home she collapsed at their front gate and also died, just 40 minutes after her husband. She too had previously suffered with heart problems. Their funeral service was held at the Nazareth Lutheran Church, South Brisbane, and was attended by a very large crowd of relatives and friends.

ORR family. Several members of this family are buried in Grave 84 Section 5A. Firstly, John Orr, died 29 Sep 1888. He was a farmer/weaver from Clay in Co. Armagh, Ireland. He emigrated with his wife and family of 7 arriving on the John Fielden in Queensland in 1853. He got a Land Grant and farmed in what is now Graceville.

Secondly, William Orr, John’s younger son. He died on 11 Jun 1898. His Mother was Jane (formerly) Malcolmson who died in 1862 and was buried in the Baptist Burial Ground while the family still lived in Mary Street, Brisbane. William took over the farm from his father. He married Mary Jane England and they had a family of 8.

Thirdly, Mary Jane Orr (formerly England), pictured below with William. Died 11 Jan 1913. Married William Orr at South Pine River on 30 Aug 1877. She was the daughter of David England and Margaret Ann Davis, both ‘Pioneer Families’ of the Pine Rivers, She was born in Drumnacanvy, Co. Armagh, Ireland and came to Queensland in 1862 on the Beejapore. After her death, the farm was sold but the house still stands in Richardson St., Graceville.

Fourthly, Henry Norman Orr, baby son of Wm. and Mary Jane Orr. Died 1895. (Thanks to Janice Griffin for this entry). 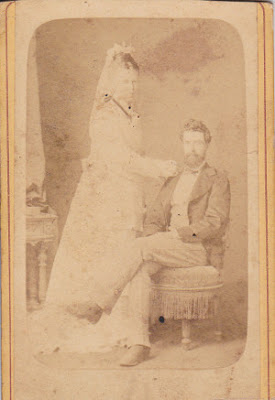 Do you have a relative or friend who you would like to see included in the Cemetery Residents- O page? We’d love to hear from you. Just send us their story via email, text or word document and we will format it for inclusion here (if it is relevant).We are interested in getting the stories of ‘ordinary’ people who have little-to-no presence in the history books. They do not need to have lived incredibly dramatic lives.