CAIRNCROSS, Captain William (1812-96): Capt William Cairncross arrived in Sydney in 1839. He married Elizabeth Edmonstone, whose brother George was Brisbane’s first butcher. In 1847 Captain Cairncross started a Bread, Fancy Bread, Biscuit Bakers and Confectioners business in Brisbane. The shop was on the corner of Albert and Queen streets, and the family lived on the premises. Elizabeth’s London training as a seamstress was useful in outfitting their seven daughters. In the 1850s the Cairncross family retired from trading and settled at Morningside. In 1881 they built a house they called ‘Colmslie’, after a Cairncross estate in Scotland, near the junction of Thynne and Lytton roads. The house had an observatory and Captain Cairncross relayed weather and shipping information to the authorities. Later it was used as a quarantine station and as the Colmslie Hospital. The Cairncross family were active attendees at Bulimba Church of England, arriving in a carriage complete with footman. Colmslie House was later demolished. The Cairncross Graving Dock, built during the Second World War, was named after this family.

CAMERON, Dr Malcolm Leslie (d. 1925). From the Brisbane Courier, April 1925: ‘The medical profession in Brisbane and a wide circle of friends have sustained a serious loss by the death of Dr. Malcolm Leslie Cameron, M D, MS, which occurred yesterday. The late Dr. Cameron was born in London, Ontario, Canada, of Scotch Canadian parents. He was educated at the Toronto University, at which he gained a scholarship to the Edinburgh University. He took out his M.D. and M.S. in 1880 at the Edinburgh University, and for 12 months practised at a hospital in Edinburgh. He then went back to London, Ontario, remaining there for a few years, after which he journeyed to New Zealand. For 18 months he stayed there, and then, about 40 years ago, he proceeded to New South Wales, where he worked up a good country practice in the Manning River district It was there, at Wingham, that he was married. Queensland called, and l8 years ago he took up his residence in Brisbane at the corner of Vulture street and Stephens street, where he had resided up to the time of his death. He is survived by his widow, three sons, and two daughters Hie funeral, which will be of a private nature, will take place at the South Brisbane Cemetery this afternoon. It is requested that flowers shall not be sent.’ 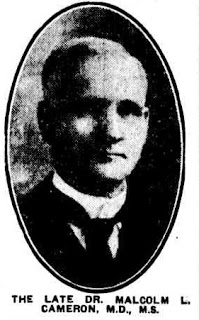 CAMPBELL, Annie (1870-1911) (left): Prisoners who died at the nearby Boggo Road gaol were usually buried at South Brisbane Cemetery in unmarked graves. Annie Campbell was one of these people. Described as “a small, middle-aged woman with a small face and scanty brown locks”, she was gaoled for twelve months in March 1911 for “uttering a false document” – she had tried to cash three false cheques. Formerly a widow, she had remarried just two months before. Unfortunately, when 41-year-old Annie entered Boggo Road Gaol she was pregnant. In August, feeling weak and in poor health, she showed signs of being in labour and was taken to Lady Bowen Hospital. After a long labour she gave birth to a stillborn baby. Three days later Annie herself died. The official cause of death was listed as “Alcoholism, Cirrhosis of Liver and general debility. There were no suspicious circumstances.”

CHALLINOR, Henry Binney McCall (1858-1926). From the Brisbane Courier, October 1926: ‘The funeral of the late Mr. H.M. Challinor, formerly secretary to Police Commissioners Parry-Okeden and Major Cahill, took place to the South Brisbane Cemetery yesterday. Mr. Challinor, who was 68 years of age, was a son of Dr. Challinor, the first Government medical officer in Queensland. His death was due to a nervous breakdown, following influenza. In the position of Clark of Petty Sessions, the deceased saw service in Beenleigh, Cooktown, and Bundaberg. Subsequent to his retirement Mr. Challinor was a prolific writer of both prose and verse. A widow, two sons, and three daughters survive him.’

COWELL, Elizabeth (1826-64) died in January 1864 trying to save the life of her maidservant, 21-year-old Sarah Hunter. Sarah was cooking in the kitchen of the Cowell house at North Quay when her dress caught fire after an accident with a kerosene lamp. Hearing her screams, Elizabeth ran to help but her own dress caught fire. Her husband Thomas managed to extinguish the flames with his hands, but both women were badly burned, and Elizabeth died the next morning. Sarah followed her one day later.

Elizabeth was well known in Brisbane, having been for some years the hostess of the Victoria Hotel. She was originally interred in the Paddington Cemetery, which is now the site of Lang Park. That cemetery closed in 1875, and most of the bodies were reinterred after 1911 when the area was converted into a recreation area. Elizabeth’s remains were then moved to South Brisbane Cemetery. 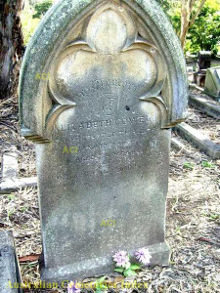 CRIMMIN, Helena Duffy Francis (1874-1974), local resident (PDF article)
CRIPPS, Arthur (1879-1934), boxer (webpage)
CULLEN, Edward Alexander Ernest (1861–1950), engineer (web article)
CURRY, Jackson (1832-1909) was born in County Derry, Ireland and married Jane Orr (1831-1904) in 1855, the same year that they migrated to Australia on board the Cambodia. They settled in Queensland and had eight children. Jackson joined the Brisbane police force in 1856, and by 1860 was a sergeant based at Gatton, where he left the force to become an innkeeper. After business difficulties he worked as a miner, and was living in Boggo Road, South Brisbane, by 1874. In 1891 he was appointed pound-keeper at the animal pound facing the cemetery, off Boggo Road, a position he held until his death. The pound was used to confine stray animals, including cattle and horses. It was closed in the 1920s and is now the site of Pound Street.

Do you have a relative or friend who you would like to see included in the Cemetery Residents – C page? We’d love to hear from you. Just send us their story via email, text or word document and we will format it for inclusion here (if it is relevant).We are interested in getting the stories of ‘ordinary’ people who have little-to-no presence in the history books. They do not need to have lived incredibly dramatic lives.