PARKER, Harold (1873–1962) sculptor (web article)
Paulovich, Mary Anne Phillips (1824-76): Mary Anne Lyons was a young Irish girl who arrived in Australia about 1841. By 1843, she had married William Thomas Phillips, a son of the pioneering Phillips family of Paterson, New South Wales. She and William had seven children before she formed a liaison with Robert Hector Paulovich in the early 1850s and by whom she had a further 5 (perhaps 6) children. Mary Anne and Robert came to Brisbane about 1863, following periods of time in Sydney and Melbourne, and promptly established businesses. Mary Anne took the lease on Riverview House (later owned by Sir Joshua Bell) in Russell Street and by 1870 was advertising it for rent to gentlemen boarders and families. Archibald Meston, when writing about Brisbane in 1870, noted that:
On the bank of the river, at the foot of Russell Street, was a big stone house, kept by a Mrs. Phillips, who was Mrs. Paulovitch [sic], but was usually called by the name of her first husband. She had two handsome daughters, Kate and Lydia Phillips. In after years Lydia married Gore Jones, the present day barrister, whose father was the famous Gore Jones, a barrister of Brisbane’s early days. He will remember a little episode in which he and I were engaged when staying together in that year 1870. The butcher next morning asked Mrs. Phillips if two of her boarders had gone insane! It was supposed that he referred to Jones and myself!

In 1873, Mary Anne moved from Riverview House and took a lease on Acton House (now known as the Ship Inn Hotel). She ran the premises as a boarding house until March of 1876. She then moved to Hews Cottage in Grey Street which she renamed Bona Vista Cottage after the Phillips’ family property in Paterson. Mary Anne died at the cottage on the 27 September 1876. Buried in the same grave as Mary Anne is her daughter-in-law, Jane Phillips, who died in 1877.

Paulovich, Robert Hector (1820-74): Robert Hector Paulovich was a cosmopolitan character, described by Archibald Meston as “a tall dark man of distinguished appearance”. Robert was born in 1820 in the Dardanelles, now known as Turkey. His mother was English and his father was born on the coast of Dalmatia. At the time of his birth, Robert’s father Stephano was the British Vice-Consul to the Dardanelles. Robert Hector came to Australia in 1837 with his uncle John Rickards (his mother’s brother), his cousin and his brother Francis. Rickards established a number of drapery stores in the Hunter Valley area and in Sydney and young Robert was sent to manage the store and his uncle’s affairs in West Maitland and Musswellbrook. It is not known how he met Mary Anne Phillips, wife of William Phillips, a son of the well-known pioneering family of Paterson in New South Wales, but the couple formed a relationship. They left the Hunter Valley area in the early 1850s, residing for periods of time in Sydney and Melbourne before moving to Brisbane about 1863.

Robert started a general goods and drapery business advertising quality products at his premises in Queen Street very nearly opposite what was then the Town Hall. In 1870, he moved his business from Queen Street to South Brisbane opposite the Royal Mail Hotel at the corner of Stanley and Russell Streets. Sadly, Robert died on the 30 January 1874 at Acton House (now known as the Ship Inn Hotel), the lease of which his wife had acquired only a few months previously. His untimely death was a blow to his wife and family and was even reported in the Maitland Mercury and Hunter River General Advertiser on the 3 February 1874 as he had been “very much esteemed here”. The headstone for his grave was erected by his son, also called Robert Hector.

Peirson, Arthur Thomas (1867-1933): Arthur Peirson was born in Newcastle-on Tyne, England, in 1867 and arrived in Queensland as a teenager in 1885. He worked as a clerk in the prison service, rising to become the chief clerk of prisons by 1904. He was also appointed as superintendent at Boggo Road gaol, a position he held until his death in 1933. During this time he also served as Comptroller-General (1919-26). In addition to all this, he was a Major in the Queensland Military Forces and received the Victorian Decoration for long and distinguished service. He married Florence Drury in September 1897, and they had their only child, a boy named Duncan, in 1900. Peirson died one afternoon in May 1933 after a long illness. His funeral was well attended, with many government dignitaries paying their respects, including the Lieutenant-Governor.

Price, Douglas was born into a Quaker family in Birmingham in 1874. At the age of 18, he joined the Anglican Church and later studied at Durham University and was ordained in the Church. He arrived in Brisbane in 1903 and in 1905 became the rector of All Saints church in Wickham Terrace.

Douglas became well known for weekly public lectures on subjects such as poetry, philosophy, literature and history, often given dressed in University gown and hood. He came into conflict with the archbishop, St Clair Donaldson, over his increasingly unorthodox theology and in 1911 the archbishop asked him to resign. The parishioners objected to this and petitioned the archbishop to withdraw his request, without success.

Price left for Europe after resigning, but later in the same year he returned to Brisbane at the request of his many followers. He established a Progressive Christianity or Modernist Group and held well attended services. In his remaining years, Douglas wrote three novels. These books contain much of his philosophy and they received positive reviews at the time. 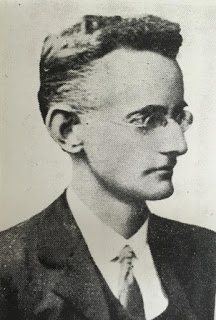 In 1916, Douglas was found dead at home by a friend who had come to visit. Whilst the newspapers reported that he had died in his sleep, his death certificate states that he died from a severed brachial or upper arm artery and it’s hard to escape the conclusion that he suicided.

His tombstone was erected by the women of the Modernist Society. Without his leadership, the movement in Brisbane slowly died. A yearly Douglas Price Memorial Lecture was held for some years from 1920 and was presented by distinguished academics. One of his obituaries stated that had Douglas Price lived anywhere but Australia, he would have had a worldwide reputation, but he is now all but forgotten.
(Thanks to Paul Granville for the above information)
Purchas, Edward (d.1878). From the Brisbane Courier, April 1878: ‘The funeral of private E. Purchas, of B. Company, Q.V.R., at the South Brisbane Cemetery on Wednesday afternoon, was attended by a large number of his late comrades in the various branches of the force. The band of the company also mustered strongly, and the funeral was conducted with military honors. The deceased was one of the original cadets, and was subsequently transferred to B. Company. He died on Tuesday last, from fever, after an illness of five weeks.’