JEKYLL, Captain John Richmond (1839-88): At the time of his death Jekyll was governor of Boggo Road gaol, a position he was appointed to in October 1885. He had previously served in the Royal Marine Light Infantry, rising to the rank of Captain. After this he worked at the Darlinghurst and Berrima gaols in NSW, and then accompanied a NSW contingent to the Sudanese conflict, returning to Australia in 1885. Jekyll died in January 1888 after a bout of typhoid. Despite the short notice given for his funeral, there were about 30 carriages in the procession to the cemetery.

JUSTER, Emily Rebecca (1861-1931). “A large circle of friends in Queensland will regret to learn of the sudden death on Thursday last of Mrs Emily Rebecca Juster, widow of the late Mr William Richard Juster, of Thompson Estate, and who predeceased her 15 months ago. The late Mrs Juster, whose maiden name was Sharpe, was born at Stratford, near Bow, England, in 1861, and, with her husband, arrived in Queensland by the steamship Chybassa, in 1885. At the outbreak of the Great War the late Mrs Juster, with Mesdames Scott Fletcher and John Bale, founded the Stephens Red Cross kitchen, and she continued to be a worker In the Red Cross movement up to the time of her death, being present at a meeting of the society a few days prior to her death.

She was a member of the Annerley Ladies’ Bowling Club, and also of the Stephens Croquet Club. It was while playing on the green of the latter club last Wednesday that she became ill, and was removed in an unconscious condition to her home, Merton, Prince-street, Thompson Estate. The late Mrs. Juster is survived by a family of three sons and four daughters. The sons are Messrs. I. W. Juster and A. H. Juster (Thompson Estate), W. R. Juster (Coorparoo), and the daughters are Mesdames R. D. Gibbs (Coorparoo), and J. C. Philp (Highgate Hill), and Misses Maud and Queenie Juster. There are also eight grandchildren. The funeral took place to the South Brisbane Cemetery, after a short service at the home conducted by Rev. R. B. Massey, of Holy Trinity, Woolloongabba. Representatives were present from the Master Builders’ Association, Ladies’ Red Cross Society, Annerley, and Balmoral Ladies’ Bowling clubs, Stephens Croquet Club, and the Annerley Bowling Club. Rev. R. B. Massey officiated at the graveside.” (Brisbane Courier, 7 May 1931) 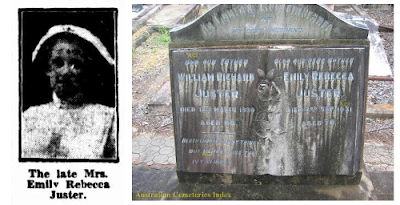