This is grave number 4-233. These ‘areas of interest’ are marked on the entry signs in the cemetery. 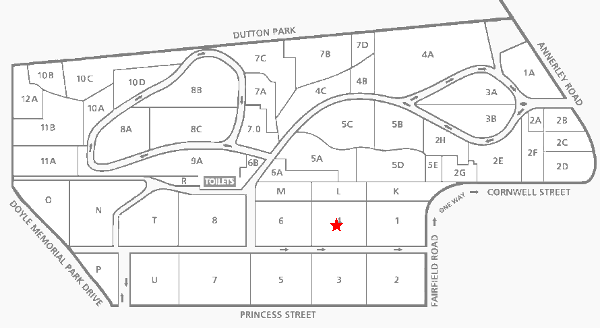 The remains and headstones of James and Johanna Sutherland were moved from the Paddington Cemetery (aka the North Brisbane Burial Grounds, or Milton Cemetery) to South Brisbane in 1913.
Paddington was a multi-denominational, albeit segregated cemetery that operated from 1844-75. It closed in part because of the unsuitability of the flood-prone land for a burial ground. The cemetery subsequently fell into disrepair and it was later proposed the grounds be turned into a recreation reserve. The ‘Paddington Cemetery Act’ was passed in 1911, authorising the Queensland Government to resume the land. Relatives were given a year to exhume and reinter their loved ones (at government expense) and this occurred in 1913. Out of the thousands interred at Paddington, only the remains of 186 people were reinterred in other cemeteries, and 136 memorials were relocated with them.
At least 20 memorials were moved to South Brisbane Cemetery in 1913. A number of other memorials and reinternments from Paddington also happened prior to the 1913 date. The Sutherland’s headstones are located in portion 4 and the remaining headstones are scattered throughout the other portions of the cemetery.
The recreation reserve at the former cemetery later became the famous Lang Park stadium.