The Sailer family owned Wurtemburg Farm at Rocklea, which in the 19th century was part of the rural ‘Boggo’ district that extended from Fairfield to Oxley. Many German immigrants settled in the small farms in this area. Among these were Gottfried Friedrich Sailer (1821-84), his wife Christina Friedericke (1826-1903) and their several children. Gottfried and Christina were originally from Grossbottwar, Württemberg, and married in 1857. They emigrated to Queensland on the Grassbrook in 1861.

Their marriage was over by 1881, and Gottfried died in 1884. Several of their children and grandchildren are also buried in the South Brisbane Cemetery. Most of the children in the family married within the local German community, and the family tree is replete with such surnames as Wriede, Shreiwers, Schepp, Schmalz and Nuhn. Their daughter Emma married John Tucker in 1888 but died in 1890, five days after given birth to John Friedrich, who died at birth.

Annie Sailer married William Vousden in 1877. He died 1878 and she then married John Henry Zohn in 1879. Godfrey and his wife Annie Margaretha Lather (1865-1908) had five children, among them Samuel Gottfried Sailer (1888-1937) who served in World War I and survived despite being wounded three times and gassed once. He died near Mooloolah while working as a telephone linesman, after being struck on the head by a branch that dropped from a tree he was felling. His sons Samuel Edward (d.1924) and Arthur Sherman (d.1929) are also in the cemetery, as is his wife Irene Sherman (1893-1945). 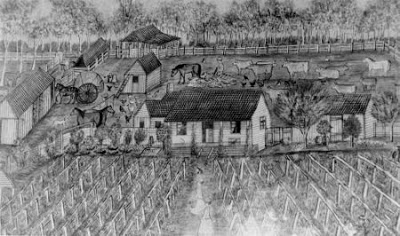 Shearer, Robert (1862-1933) The death of Mr. Robert Shearer occurred on Monday afternoon after a short illness at his home in Norman Crescent, Norman Park, Brisbane. The deceased was the second son of the late Mr. and Mrs. Alexander Shearer, and was born in Aberdeen, Scotland, seventy-one years ago. With his parents and one brother (the late Mr. Alec. Shearer, of Annerley), he arrived in Brisbane by the sailing ship, Famenoth, nearly sixty years ago. For thirty years the late Mr. Shearer was connected with the South Brisbane Town Council, holding various positions, including that of assistant Town Clerk and City Valuer. Later he became District Valuer for the Brisbane City Council, which position he held till he retired in 1931. The deceased took a great interest in matters appertaining to Friendly Societies. Under the Grand United Order of Oddfellows ho became a Past Noble Grand of the Southern Cross Lodge. He also was a Past District Master of the Stanley District G.U.O.O.F., and a Past Grand Master of the Queensland G.U.O.O.F. At the time of his death, the deceased was Grand Lodge auditor. For a number of years he occupied a position on the governing body of the B.A.F.S., and was a past president of that society. The late Mr. Shearer was married to Miss Mary Ann Currey, the youngest daughter of the late Ms. and Mrs. Jackson Currey, of Brisbane. Since his arrival in Queensland, the late Mr. Shearer had lived in various parts of the South Brisbane area. The deceased is suiwived by his widow, one son, Mr. L. Moreton Shearer, of Norman Park, and one daughter, Mrs. G.F. Nash, of Annerley. There is also one granddaughter. The funeral took place to the South Brisbane Cemetery and was largely attended. The burial service was conducted by the Rev. Mr. Gresham, of the Presbyterian Church. Past Noble Grand Brother W.B. Peterson read the G.U.O.O.F. service.

Schofield, Henry (1850-86), government agent of the labour schooner Hopeful, was one of five men to be convicted, in December 1884, of ‘kidnapping on the high seas’ and sentenced to life in prison. The Hopeful had returned to Queensland with South Sea Islander recruits for the sugar plantations, but it was alleged that the recruits were unaware of why they were there and had therefore been kidnapped. What was worse, one of them had been killed on board. Two of the crew were sentenced to death (later commuted to life), while Schofield and another man received life imprisonment, the first three years in irons. These sentences shocked public opinion and there was much agitation for their release. In 1890 they were pardoned and released. Schofield, however, had been ill for some time, and late one night in Boggo Road prison he had a fit and died. He was originally from Liverpool, England. 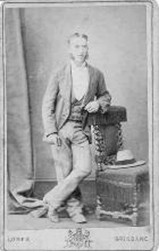 Shipp, Robert (1861-1935) (left): Cemetery sexton. Robert Shipp arrived in Brisbane from England with his family on the Young Australia in 1862, at the age of one. He married Margaret Taylor Barclay (1861-1902) in Brisbane in 1881. They had nine children. He was sexton at the South Brisbane Cemetery from about 1887 until the 1930s, and the family lived in the caretaker’s cottage there. He was reputed to go to work armed with his crowbar and his pet bird (a magpie or crow) sitting on the handle. Three of the Shipp children died and were buried at South Brisbane while Robert was still the sexton there.

Soden, John (1837-1921): John Soden was born on 26 March 1837 in Coventry, England. John and Mary Soden (right) arrived in Brisbane on the ‘Chatsworth’ in 1862. They worked on the Grimes arrowroot farm at Fairfield for six years before leasing 160 acres in Coopers Plains, bounded by Kessels, Orange Grove, Musgrave and Troughton roads. They built a five-roomed house and cultivated a portion of the land. They had a horse drawn wagon that John would drive from Logan Reserve to Nerang selling haberdashery and household wares.

In 1875 they were granted ownership of their land. In 1879, John got the tender for the mail delivery from Brisbane to Rocky Water Holes and they bought Hardcastles Hotel on Ipswich Road at Moorooka. They moved into the hotel and converted it to a general store. The mail delivery became a general carrying company and then John and his four sons developed an omnibus business across the southern suburbs. In 1885 they had 25 omnibuses working 300 horses. The arrival of the railway line at that time reduced the business for the omnibuses, but Sodens continued on Ipswich Road as a general carrier and a farrier and coach building works. The hotel was used as their home until it was destroyed by fire in 1915. They then built a house on the site, but it has since been relocated. Soden’s works are shown on a map in 1943. The land in Coopers Plains was subdivided in 1885 and called the Orange Grove Estate. It is now the site of the QE2 Hospital, Queensland Scientific Laboratories, John Tonge Centre and some 600 houses. John Soden died 21 January 1921.

Smith, Mary J. (d.1900) walked out of her Merton Street home in Woolloongabba between 3-4am on 8 January 1909, having written a suicide note to her eldest daughter with instructions as to what should be done with the remainder of the children. After the note was found Mary’s movements were traced to the South Brisbane Cemetery, where her hat and cloak were found near footsteps leading to the riverbank. Later that day the police recovered her drowned body from near the same spot.

She was buried in the family grave with Sarah, her little 2-year-old daughter who had died five months earlier from severe burns. Mary had left Sarah alone for a few minutes one morning and returned to find the poor child enveloped in flames. Sarah died in the Children’s Hospital later that day. Just six weeks before this happened, Mary’s husband had drowned after falling from the dredge Platypus.

Spark, Septimus (1877-1935), and Spark, Lindsay Edwin (1911-35), father and son. Lindsay died on 4 July in a motorcycle accident, his father died in hospital the next day after a long illness. They were buried in the same grave. Read their obituaries here.

Stephens, James Brunton (1835-1902): Stephens was born 17 June 1835 in Bo’ness near Edinburgh. He arrived in Queensland in 1866, and after teaching for a short time he became a tutor for the Barker family of the Tamrookum station, situated on the Logan River. This was when he wrote his best known poem, Convict Once. In 1873 he published The Godolphin Arabian, and also a collection of his verse, The Black Gin and Other Poems. In the late 19th century Stephens was considered to be Australia’s greatest living poet. In 1876 he married Rosalie Mary Donaldson. He was the headmaster at Ashgrove in 1877 until he left in 1882. In 1883 he was briefly the headmaster at Sandgate but then was appointed to the colonial secretary’s office as a dispatch writer. Stephens wrote newspaper articles for several newspapers, and other publications of his included The Dominion of Australia (1877), An Australian National Anthem (1890) and Fulfilment (1901) are three of his four more patriotic poems. Stephens died of angina pectoris on 29 June 1902 and was survived by his wife, one son and four daughters.

Stephens, Thomas Blacket (1819-77): He was born at Rochdale, Lancashire, England, on 5 January 1819 and arrived in Sydney on the Bengal in 1849. Stephens established himself as a wool broker and on 24 January 1853 he moved to Brisbane and set up an export business. On 10 July 1856 he married Ann Connah, with whom he had twelve children. Stephens was the proprietor of the Moreton Bay Courier newspaper from 1859 to 1869 and renamed it The Courier. He later founded The Queenslander newspaper in Brisbane.

In 1858 he was one of nine candidates elected to the new Brisbane Municipal Council. He later became Brisbane’s second mayor in 1862 and was returned as an Alderman until 1864. From 10 June 1863 until 19 May 1875 Stephens was Member of the Legislative Assembly for South Brisbane in Queensland’s Parliament. In the period 1867-1870 Stephens was Colonial Treasurer, Colonial Secretary, and Postmaster-General. In 1873 he was Vice-Chairman of the Queensland Board of Education. He was Secretary of Public lands in 1874-1875. From 22 July 1876 until 26 August 1877 he was a Member of the Legislative Council. He died on 26 September 1877 of cholera.

Stephens, William (1857-1925): William, the eldest son of Thomas Blacket Stephens. William was employed in the mercantile office for three years; was manager of his father’s estate; Director of the Imperial Deposit Bank, Brisbane Milling Co., Kingston Butter Co., South Queensland Co-operative Dairy Co., and was proprietor of Merrimac dairy farms near Nerang. He was President of the Metropolitan Transit Board; Vice-President of the National Agricultural and Industrial Association and the Nerang Agricultural and Pastoral Association. He was also a Justice of the Peace. William was a member of Nerang Shire Council 1882-1925; Mayor of South Brisbane 1888-89, 1899, and 1901; Member of the Legislative Assembly for Woolloongabba 1888-1896 and for South Brisbane 1896-1904 and 1907-1908. In 1907-1908 he was the Secretary for Public Instruction and Agriculture. He was Member of the Legislative Council 1912-1922. He died on 30 April 1925. William married Pauline Anna Caroline Effey, daughter of Minna Rowe. The house William built for his family is call “Waldheim” and still exists today, known as the “Clansman Restaurant”

Stewart, John Henry (1856-1935). Born April 1856 in Ipswich, Qld, the second eldest child of Arthur and Margaret Stewart, he married Margaret Miller in 1884. A sportsman in his youth, winning many trophies, he excelled at high jump, running and was a champion pole vaulter in his home town of Ipswich. He joined Queensland Rail and was stationed at Ipswich, Beaudesert and Woolloongabba as a locomotive engine driver, retiring in 1925 after over 25 years service. John Henry Stewart and his wife Margaret had 4 children, 2 daughters and 2 sons and lived at Toohey Street, Kangaroo Point. John Henry and Margaret both died in 1935 and are buried together at General Part B – Portion U. Three of their four children – Granville Gabriel Lorne, Elsie Lillian and Cecil Douglas are also buried at South Brisbane at 4A – 336. (Thanks to Leonie Guy for this entry)