MacINTOSH, Hugh (1958-1932) (left). From the Brisbane Courier, July 1932: ‘Mr. Hugh Macintosh, a former well known officer of the Lands Department, and a prominent sportsman, collapsed in the street near his home in Dornoch Terrace, South Brisbane, yesterday morning, and died immediately. His death will come as a great shock to his many friends, for he appeared to be in perfect health, and kept in the best condition by taking long walks every morning. It was whilst returning from one of these that he was seen to fall to the footpath. and when a doctor friend ran to his assistance he was beyond aid. The late Mr. Macintosh, who was 74 years of age, was born in Sutherlandshire, Scotland, and came to Queensland with his family in 1865.

He was educated at the South Brisbane State School, and at the Brisbane Boys’ Grammar School, where he was a silver medallist, and entered the State Survey office in 1874. Later he succeeded Mr. R.H. Lawson as chief draftsman, and held that position until his retirement in 1922. His work as draftsman made him an authority on place names and records, and even after he had retired it was customary for him to deal with numerous inquiries regarding the records of history of localities all over the State. He was a member of the committee of the Queensland Place Names; whilst the Historical Society also claimed his attention. Up to the time of his death he was a keen member of the Royal Queensland Yacht Club and a participant in its sailing events. Early in his career he won many trophies with the Lassie, and in later years his ensign was carried on the Nara, which won more than a hundred races for him. Only last week he was present at a meeting of the R.Q.Y.C., and received a replica of the Forrest Cup from the hands of the Governor (Sir Leslie Orme Wilson). There are dozens of sailing trophies in his historical home in Dornoch Terrace. The late Mr. Macintosh gained fame also as a Rugby Union footballer, having been a member of the first Queensland team that visited New South Wales in 1882. The eight surviving members of that team gathered together recently, and a reunion was arranged for the anniversary of the match in August. In his youth the deceased gentleman was a keen rowing enthusiast, and as a member of the Brisbane Rowing Club was actively interested in the sport until late in life. He was closely identified with the early history of Southport, and an island In the Nerang River is called Macintosh Island.

The late Mr. Macintosh is survived by a sister, Miss C. M. Macintosh, and a brother, Mr. T. V. Macintosh, with whom he lived. The funeral will leave his late residence at 3 p.m. to-day for the South Brisbane Cemetery.

MADDEN, ‘Nora’ (1858-1938) was born Ann Ford in 1858 at Warrowrie Station, Binalong, NSW, but she always preferred to be called Nora. She married William Madden in 1873 and had seven children with him, but he deserted her and the family in 1896. By 1900 she was operating a carrying business using horse-drawn carts between Cunnamulla and the border. This involved transporting items such as furniture to remote stations and towns. She also worked on occasion as a mid-wife.

Nora and her family were reported to have been on friendly terms with local Aborigines and she often ate with them. Nora eventually moved to Toowoomba and later to Brisbane where she lived with a married daughter in Spring Hill until her death in 1938.

MARKS, William (1844-1929). From the Brisbane Courier, March 1929: ‘Mr. William Marks, one of the earliest squatters of the Logan district, passed away on February 13 at the residence of his eldest daughter, Mrs. Hughes, Ipswich-road. The late Mr. Marks was born at South Brisbane 85 years ago, and was remembered by all who knew him to be the possessor of a benevolent and sympathetic nature. He was noted for his fine horsemanship and was a keen judge of stock. He married Miss Naomi Norris, of Munruben station, who predeceased him 4½ years ago, After his wife’s death he resided with his daughter, Mrs. Allen, of Rocklea. The late Mr. Marks is survived by five sons – Messrs. A., J., P., G., and A.N. Marks; and five daughters – Mesdames Hughes, Allen, Pratten, Benson, and Black; 19 grandchildren, and seven great-grand-children. The funeral took place to the family grave in the South Brisbane Cemetery. The Rev. H.T. Molesworth conducted the service at the graveside.’
MARTIN, Ann Jane née Hill Martin, Ann Jane née Hill (1836-1903) was born near the village of Kurrajong, NSW in 1836. In 1859 she married Charles Robert Martin, a station manager and grandson of First Fleeter Robert Forrester, at his parents’ house in Wilberforce. Her life can be traced by the births of her 11 children in different, often isolated parts of NSW & QLD: Rebecca at ‘Mongola Station’ NSW, 1860; William at Tenterfield NSW, 1861; Emma at ‘Terry Hie Hie Station’ NSW, 1863; Henry at ‘Ulumbarella Station’ NSW, 1865; Francis Alexander at ‘Gravesend Station’ NSW, 1868; Charles at North Richmond NSW, 1869 (during a trip home; the baby died there 9 months later); Alfred Arthur at ‘Derra Derra Station’ NSW, 1871; Charles Edward at ‘Spring Grove’ QLD, 1873 (where Rebecca & Francis both died of measles in 1876); Sarah Anne at ‘Yalebone Station’ QLD, 1877; Florence & Isabel at ‘Yowah Station’ QLD, 1879 & 1882. Yowah was near Eulo, where the Martins put down roots for about 20 years. Ann’s husband was a Cobb & Co coach driver through the 1880s but had to travel looking for work in the 1890s. He died at Diamantina Lakes QLD in 1899. Son Charles died of heart failure in 1902. Ann worked as a domestic servant in Eulo until illness drove her to Brisbane for medical attention. She died of uterine cancer in the Diamantina Hospital on 24 November 1903. More details in the book ‘Southwark Luck’ by Louise Wilson.

110 years later her descendant Barbara Martin visited her grave and was very sad to see a grassy patch of earth with nothing to pinpoint the site. Alone in Brisbane, ill and with no family to support her, it must have been awful for Ann, so Barbara kindly arranged for Brisbane City Council to put a plaque on the site.(Thanks to Louise Wilson for the above entry) 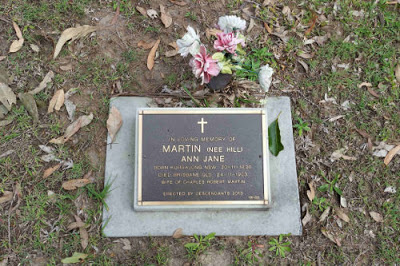 McKEE, Marjorie (-1929) was the two-year-old daughter of a Mt Gravatt couple. She wandered from her home on a Thursday, and despite desperate searches her drowned body was not found until the following Tuesday, lodged in a tree on Bulimba Creek at Belmont, about two miles from her home. She had apparently tripped and fallen into the water. The following account of her funeral appeared in the Evening News:

‘Poignant scenes were witnessed at the home of the child; Marjorie McKee, at Mount Gravatt today, when the funeral left for the South Brisbane Cemetery. Friends and relatives and many who had assisted in the search followed the hearse bearing the small white coffin, which was completely hidden under a heap of flowers. A huge wreath was sent by fellow workers of the child’s father, who was employed as foreman at the Broadwater Sand Company, Mount Gravatt. A short service was hold by the Rev. S. Roberts of the Broadway Congregational Church, who conveyed the sympathy of the Congregational Union of Australia and New Zealand.’

McMILLAN/Anderson/Morrison, Isabella (1835-1922) was born in Lanarkshire, Scotland to Agnes Ann and Alexander McMillan. She had 11 siblings, most of whom emigrated to Armidale, New South Wales. Isabella married Thomas Anderson in November 1853 in Hamilton, Scotland. They had 11 children. Isabella and 8 children emigrated to Australia after her husband died, arriving in Cooktown on the ship Almora in 1883. They settled in Ipswich, Queensland, but within 6 weeks one of her sons drowned in the Bremer River. Leaving her children behind with their eldest sibling, Isabella travelled to Armidale to be with her parents and siblings. She remarried in the Presbyterian church in Armidale in 1887 to John Morrison. In 1906 he died and she returned to Brisbane to live with her son John and his family at East Brisbane. Isabella died at Brisbane Hospital on 22 February 1922. (Thanks to Alli Gledhill, GGG-grandaughter of Isabella, for this entry).

MESTON, Archibald (1851-1924): Meston was born 26 March 1851 in Aberdeen, Scotland. He arrived in Sydney with his family in 1859 and lived at Ulmarra on the Clarence River, NSW. He moved to Queensland in 1874 with his wife Margaret Frances Prowse Shaw and from 1875-81 was the editor of the Ipswich Observer. Meston represented Rosewood in the Queensland Legislative Assembly from 1878-82. He studied local Aboriginal cultures through his interest in exploration, and was commissioned to prepare plans for improving the lot of Queensland Aborigines. His proposals were embodied in the Aboriginals Protection Act of 1897. He was made a Justice of the Peace, and from 1898–1903 he was Protector of Aboriginals for southern Queensland, later including the central division. He was one of the first officials to visit Great Keppel Island in August 1900. He also collected plants in the vicinity of Rockhampton during 1906, and is commemorated by rare species of Garcinia mestonii F. Bailey and Piper mestonii F. Bailey which occur at Bellenden Ker. Archibald Meston died 11 March 1924.

MOWBRAY, Rev. Thomas (1812-67): Thomas Mowbray was born in Hamilton, Scotland in 1812, arrived in Australia 1841 and moved to the Moreton Bay Settlement in 1847. He came to be called the ‘Father of Presbyterianism in Queensland’, opening Brisbane’s first Presbyterian Church for public worship in May 1851 in Grey Street, South Brisbane. In the late 1840s Reverend Mowbray purchased eleven acres of riverfront land, now the site of Mowbray Park, East Brisbane. He built his big stone house ‘Riversdale’ on a grassy knoll with views of the river. Mowbray established a school at ‘Riversdale’. At the time of his death his estate was 83 acres stretching from the present Lytton Road through to Logan Road. Thomas Mowbray was interred at the Paddington Cemetery (now the site of Lang Park) and was later re-interred at the South Brisbane Cemetery.

MURPHY, Isabella (1841-1910) was born in Liverpool, England, September 1841, the middle daughter of Eliza Green (1815-) and Edward Davies (1810-1879). She came to Australia as a 12 year old, with her parents and two sisters, Mary Ellen and Elizah, on the ‘Agricola’ in 1853. They spent some time in Brisbane and Ipswich, then moved to the Drayton Area. This move took them 4 weeks by bullock dray. At the age of 16, she married Peter Murphy on 20 May 1858, at Drayton. They opened soft drink Manufacturing Businesses in Toowoomba and Dalby. In 1871, Peter died suddenly at the age of 38 after 13 years of marriage. She was left a widow at the age of 29, mother of six children under 10, and pregnant with her 7th child. She continued on with the business, opening factories at various times in Rockhampton, Maryborough and Bundaberg, which several of her sons later managed.  Following the sale of these factories she relocated to Brisbane around 1893, and lived in Jane St., West End until her death. She passed away in 1910, aged 68, from a cerebral haemorrhage. Her daughter Eliza Murphy (1861-1929) is also buried in the same grave, but there is no headstone marking this. (Thanks to Anne Dewar [great-granddaughter] for this information).