Hockings, Albert John (1826-90), the son of Thomas and Jane Hockings, was born in St Martin-in-the-Fields, London, England. The family emigrated to Australia in 1841 and moved to Brisbane shortly afterwards. Albert became a seed merchant, with nurseries at West End, and published a number of books on gardening. In his day he was one of Brisbane’s best-known citizens, and served as an alderman in the first Brisbane Municipal Council (1859), mayor in both 1865 and 1867, and as MLA in 1876. 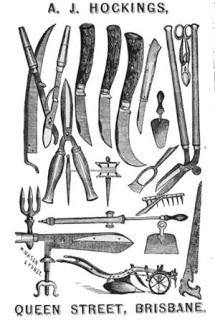 Samuel was originally from Manchester, England, and arrived in Australia as a young child. After living in Toowoomba in the 1860s he wrote for a number of newspapers before working for the government Hansard staff from 1884 until his death, which was caused by heart attack. He married Sarah Bulcock in 1883.