There are a few headstones in South Brisbane with dates of death on them that actually predate the 1870 opening of the cemetery. How can this be? It is due to the relocation of a number of bodies from the North Brisbane Burial Grounds at Paddington, which had opened back in the 1840s and was closed in 1875. That site was redeveloped as a recreation reserve during the 1910s, which prompted the removal of many bodies and headstones from there to other cemeteries.

The Paddington Cemeteries Act of 1911 allowed the relatives of the people who had been buried in that old cemetery to reinter the remains of their loved ones elsewhere, at government expense. It was reported that about 136 monuments and the remains of 186 persons were moved to other cemeteries. These included an estimated 17 headstones and 22 people who were moved to South Brisbane.

Several hundred of the unclaimed monuments were removed and stored outside a nearby church. To this day there are still remnants of graves beneath Lang Park stadium, which began life on the spot of the former northern cemetery in 1914. The surrounded areas also contains remains of the old cemetery. 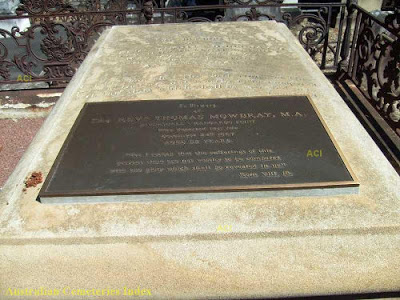 One of the graves relocated from Paddington to South Brisbane was that of the Reverend Thomas Mowbray (1812-67) (above). Originally from Scotland, he came to be called the ‘Father of Presbyterianism in Queensland’, and opened the colony’s first Presbyterian Church for public worship in South Brisbane, 1851. He lived at what later became the site of Mowbray Park, East Brisbane (the suburb was originally called ‘Mowbraytown’). He was re-interred at the South Brisbane Cemetery in 1913.

The Mowbray grave is one of the ‘Areas of Interest’ highlighted in the cemetery.