There are a great variety of memorial styles in the cemetery. The three basic forms include headstones, which are flat and vertical and are the most common type as they were the cheapest and easiest to make. Monuments feature statues, obelisks or columns. Obelisk-style stones of granite and marble have been used for centuries but are no longer common. Historically, they often marked the graves of prominent political, business or military figures. Wealthy families also erected monuments to commemorate several family members together. The word ‘monument’ itself comes from the Latin, meaning ‘to remember’. The third and least-common type are tables, which are horizontal slabs set into the ground.

The parts of a headstone

The vertical stele (plural ‘stelae’), also known as the tablet or die, is the main part of the headstone. A stele standing without a base is called a monolith. A stele that lies horizontally on the ground is called a table, slab, grave marker or flat marker.

A pedestal can be positioned above the plinth and support the headstone or monument above it. Pedestals are adapted from ancient Roman monuments, and inscriptions can sometimes be found on a number of sides of them. 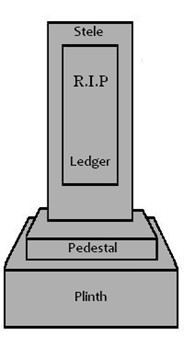 The plinth is the base stone that is set into the ground, and upon which the rest of the headstone stands. The base adds stability and presence, and protects the more expensive headstone material above it from being damaged by ground moisture. 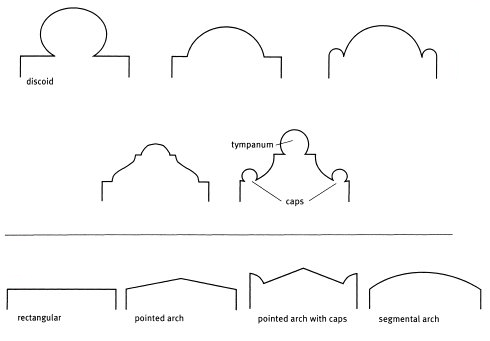 Jardinière
From the feminine French word for ‘gardener’, these are decorative vessels for holding plants. Widely used in the mid-20th century and usually made of sandstone or concrete.

Immortelle
These are long-lasting flower arrangements. It was once more common to use natural dried flowers placed inside glass coverings, but later the ceramic types became more widely used.