Although married, Gladys had separated from her husband, and was living with her two children at her mother’s house on Stephens Road, South Brisbane. Marquis, aged 47, was still married, with five children, but had a reputation for infidelity and had made a lot of enemies around the State. In the weeks that followed a definite suspect emerged, being a six-foot-tall ‘bushman type’ who had bought a gun on the day of the murder, but despite a massive police hunt he was never found.

WARE, William James (1844 -99): William Ware was one of five executioners to work at the Boggo Road prison, and he conducted the hangings of 18 prisoners during his 13 years in the job. Originally from Scotland, his early career was spent in the civil service before arriving in Queensland in 1876. Ware was appointed “Public Executioner and Scourger of the Colony of Queensland” in June 1886. He married Annie Osborne during the following year. In 1892 she gave birth to their only child, a girl called Elsie, who died in 1898, and in November of the following year William James Ware died of cancer at his home in Cambridge Street, East Brisbane.

WATKINS, Robert (1838-1915). From the Toowoomba Chronicle, March 1915: ‘We regret to record the death of another Queensland pioneer, Mr. Robert Watkins, having passed away on the 23rd of March, after a lingering illness, at the ripe age of 77 years. Although a native of West Maitland, Mr. Watkins was practically a Queenslander, as he came to Ipswich with his parents in 1842, when only four years of age. His father (Mr. Charles Watkins), was a well-known and respected citizen of
Ipswich, having been an alderman for several years. After leaving school, Mr. Watkins first engaged in pastoral pursuits, but afterwards he spent most of his time on the various Queensland goldfields. He was well-known at Gympie, Talgai, Pikedale, and Canal Creek, in the days when these gold fields were first opened up. In 1865, at Clifton, he married Miss Ellen Byrnes, of Armidale eventually settling in Warwick, and afterwards he came to Toowoomba. where he resided until his death. He leaves a widow and seven grown-up children, and several grandchilden, to mourn their loss. His family are as follows : Messrs. Charles and James Joseph Watkins, Mrs. W. Heller, Mrs . E.J.J. Duggan, Misses Jean, Alice, and Nurse Watkins (of St. Alban’s Hospital, Brisbane). By the special request of the deceased, he was interred beside his brother in the South Brisbane cemetery. The Rev. F. Wilchil and Rev. J. Byrne officiated at the graveside.’

WEBSTER, David (1864-1937): Webster was an early resident of the local area who had enough land on which to build a house and, in 1888, a cake and biscuit factory on Boggo Road opposite the gaol and school. His grand house, named ‘Beulah’, stood on the corner of Gladstone Road and James (now Lochaber) Street. He was born in Ipswich, Queensland, in 1864, and after learning the bakery business traded as a master baker in Brisbane for 54 years. His thriving business was able to support and service a number of his own tea rooms in the city. He was known for his business probity and his social charity. The bakery remained open for decades after he died, and the company was eventually bought by Westons. 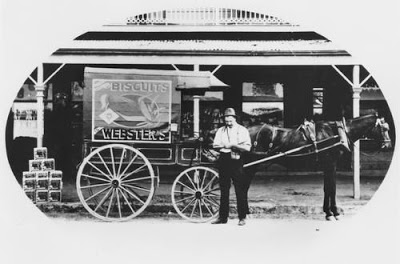 WILKINS, Russell (1836-1905): Wilkins was one of the most colourful residents of Fairfield. He was born in 1836 at Westbury, Gloucestershire, and emigrated to Victoria before arriving in Queensland in 1861. He established a stationery business in 1874, and later became an importer of china, glass and earthenware fancy goods, and fireworks. He also owned several businesses around Queensland. Wilkins established the Red Arcade on Queen Street, Brisbane, selling toys and fancy goods, complete with ‘a novel cash tramway…worked by electric motor carrying documents for scrutiny or change to customers’.

The shop also had many toys and large realistic animals that made noises. Wilkins settled in his ‘Irvinebank’ home, off Fairfield Road, in 1892. His home was as extravagant as his shops. The extensive grounds were converted into beautiful gardens featuring a lake with black swans and carp. Peacocks roamed the lawns around caged animals and birds, including kangaroos and monkeys. The hedges were clipped into the shapes of animals. Every year on his birthday, Wilkins would give a garden party for all the district children, followed by a fireworks display. He died in 1905 aged 69. Irvinebank was later divided into two, and part of it now stands on Redarc Street, a reference to the Red Arcade.

WURTZ, Phillip (1862-1936). From the Courier-Mail, September 1936: ‘The death of Mr. Philip Wurtz took place at his residence, Ekibin Road, Annerley. He was 74 years of age and had resided in Brisbane since his retirement from the Department of Public Instruction in 1928. Mr. Wurtz served 52 years as a teacher in various parts of Queensland. He was a native of Mackay, and entered the department at the age of 14 in the Mackay State School, after which he became head teacher of the State schools at Eton, Burnside (Mulgowie). Black Jack, and lastly Plainland. Mr. Wurtz was a very conscientious teacher and a strict disciplinarian, but had a lovable disposition. He was always a ready and willing worker in all charitable functions, and helped forward any suggestion for the progress of the district in which he lived. The work done by himself, wife, and his pupils for the Red Cross during the Great War will be remembered by the people of Laidley and districts. Mr. Wurtz was a member of the United Grand Lodge of Queensland, He is survived by his widow, two sons, Mr. Alick Wurtz, of Ingham, and Mr. Victor Wurtz, of Marburg, and one daughter, Mrs. S. R. Viertel, of Ekibin Road, Annerley.

Do you have a relative or friend who you would like to see included in the Cemetery Residents- W page? We’d love to hear from you. Just send us their story via email, text or word document and we will format it for inclusion here (if it is relevant).We are interested in getting the stories of ‘ordinary’ people who have little-to-no presence in the history books. They do not need to have lived incredibly dramatic lives.