VASILENKOV, John (1883-1936) and his son Carl Vasilenkov (1918–36) died four months apart in 1936 and had very distinctive but similar funerals. John was a farmer from Coopers Plains, and like his son was a passionate communist. Carl, who died in a cycling accident at Nudgee, was a member of the Young Communist League, and his burial service was free of religious ceremony. Several speeches were made at the graveside by prominent members of the Communist Party, and as the coffin, which was draped in a red silken flag fringed with gold lace, the assembled mourners sang ‘The Red Flag’. The wreaths consisted of red flowers, with one of them in the form of the hammer and sickle. John died in December 1936, and once again ‘The Red Flag’ was sung by the grave, and speeches were made by leading communist figures. 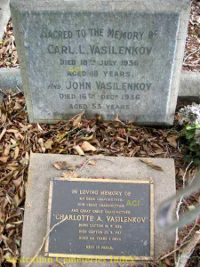 Do you have a relative or friend who you would like to see included in the Cemetery Residents- U page? We’d love to hear from you. Just send us their story via email, text or word document and we will format it for inclusion here (if it is relevant).We are interested in getting the stories of ‘ordinary’ people who have little-to-no presence in the history books. They do not need to have lived incredibly dramatic lives.