There is a traditional association between ghosts and cemeteries, but can this be harmful to the heritage values of a burial ground?

One of the foundations of heritage is understanding ‘significance’ – what does a place mean to people, both individually and socially? The heritage listing for South Brisbane Cemetery notes that it is an important social and spiritual landmark in Brisbane, forming an ‘essential component of the ritual of honouring and remembering the dead’. This remembrance is not just social, it is also very personal. Even today, there are parents who lay their deceased children to rest within the cemetery. For them, the place is very much somewhere to ‘honour and remember the dead’ as they live with ongoing feelings of profound grief. 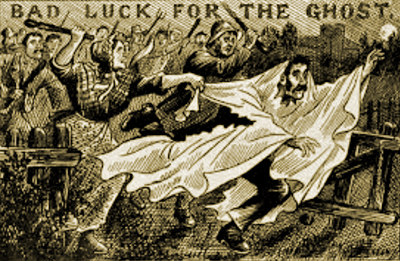 This is why various ‘friends of cemetery’ groups are concerned about the use of cemeteries for nocturnal activities such as ‘ghost tours’, pseudo-occult rituals, and ‘ghost hunting’. This issue affects not just South Brisbane, but also other cemeteries across the city, although it does not appear to be something that is allowed in other Australian states.

Falsely promoting cemeteries as being ‘full of ghosts’ is not only childish, it can distort how people perceive these places. Are they touchstones to our history and ‘keeping places’ for the memories of our loved ones, or are they places to be commercially exploited as sideshow ‘haunted houses’? There was an article about similar tours at Toowong Cemetery in the Courier-Mail in 2015, when it was noted that, “Every city needs a few ghost stories. Only these stories don’t seem to have existed except in the last 25 years, when people started making money out of cemetery tours.”

There is a large amount of online evidence to suggest that people are trespassing in Brisbane cemeteries after dark to carry out ‘ghost hunts’, or to try and have some kind of ‘supernatural’ experience. Increased trespassing by thrill-seekers can only increase the potential of headstone damage, intentional or otherwise. For example, the people who smashed over 80 headstones at Toowong Cemetery in 2009 were described in newspapers as being ‘Satanic-inspired’.

Presenting the cemetery as a ‘haunted house’ is only part of the problem. There are also multiple issues regarding the historical accuracy of the content shared on some ‘ghost tours’, where there is a troubling pattern of real historical events being sensationalised with the addition of fabricated elements. A few examples are given here:

Tour customers visit the grave of Selina Brown (a young girl who drowned during a Brisbane flood in 1890) and come away thinking that she was probably the victim of ‘foul play’ as finger marks were found on her neck. However, the doctor who performed the post-mortem explicitly said there were no marks on her or any indication of violence. So why say otherwise?

Customers are also told that executed murderer Ernest Austin was buried in the cemetery with a ‘stake through his heart’ in 1913. There is no historical evidence to back up this absurd claim, and all prisoners were actually treated with religious respect when they were interred.

They visit the grave of the Angus family where it is implied that Captain Alexander Angus (who is not buried here) committed suicide by jumping off a moored ship in 1884, but the inquiry into his death gave no indication of this, and it was supposed that he ‘had a fit’ and ‘fell overboard accidently’.

They are then told that the body of executed murderer Francis Horrocks was buried in section 6B in 1892, but then secretly and moved by his respectable family to their grave plot in section 11B. There is absolutely no evidence that this occurred. It is then claimed that his body was washed out of the ground in the flood of 1893.

The claim that bodies were washed away from this part of the cemetery during the 1893 flood – with multiple body parts being found in the river and then placed together in coffins because the original bodies couldn’t be identified – is perhaps the worst fabrication of the tour. These events simply never happened. The cemetery was inspected immediately after the flood and, despite some headstone damage, all the graves and their contents were still there. To suggest otherwise is not only false, but we know from personal experience that this story upsets descendants of the supposed victims. So why tell it?

These are just a few examples of problems with the ‘history’ told to unsuspecting customers on the tour at South Brisbane. Sadly, most customers will remain none the wiser. There is no room in History for such ‘alternative facts’. Many municipal councils around Australia have banned ghost tours or ghost hunts in their cemeteries because of fundamental issues of disrespect. It remains to be seen whether or not we can protect Brisbane cemeteries from such activities in the future.

Articles on this subject

The following articles from various authors highlight issues with pseudo-history in Brisbane cemeteries.

Citation Needed: Evil-Clown Fakelore in Brisbane
Another case of fakelore is exposed in Brisbane, this one involving a non-existent ‘urban legend’ about an ‘evil clown’.

Horrible History and the Plough Inn Ghost Mystery
A look at how a a ghost story associated with Brisbane’s ‘Plough Inn’ gets all the facts wrong.

The Woman in Black: Solving the Mystery of a Vanishing Ghost
How the sudden disappearance of a story from a cemetery ‘ghost tour’ raises questions about its original authenticity.

The Ghost That Haunted South Brisbane Cemetery… From 1,000 Miles Away
How a ghost tour company responded to the exposure of a marketing lie.

Ghost stories are few and far between at Toowong Cemetery
An exposé of the unusually ‘recent provenance’ of some ghost stories about this cemetery. (Courier-Mail)