This is grave number 8A-3. These ‘areas of interest’ are marked on the entry signs in the cemetery. 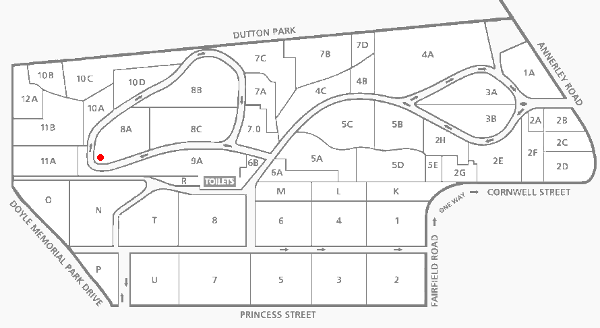 On 1 August 1870 Jane Hockings became the first person to be interred in the South Brisbane Cemetery. This would have been a quiet, isolated spot at the time, with views over the slow-moving river.

Jane had died the previous day at the age of 74 years, at the South Brisbane home of her son Albert. He was a cemetery trustee, an alderman in the first Brisbane Municipal Council (1859), mayor in both 1865 and 1867, and a Member of the Legislative Assembly in 1876. Albert was also interred in this grave, in 1890. Several other family members are also laid to rest here.

Jane and her husband Thomas were originally from London, where she ran a coffee shop. The beautiful monument on the Hockings family grave was created by monumental mason John Simmonds and features a woman leaning against a cross and dropping flowers. It has become one of the icons of the cemetery.

The large, spreading fig tree adjacent to the grave is very impressive but is of more recent origin.