This is portion U. These ‘areas of interest’ are marked on the entry signs in the cemetery. 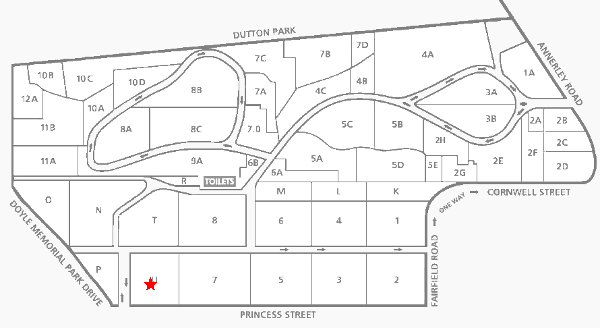 The land on either side of what is now Hopeville Avenue once belonged to Louis Hope (1817-94), who was the seventh son of John Hope, fourth Earl of Hopetoun. Louis moved to Moreton Bay in 1848 and took up land at Ormiston, Kilcoy and here at South Brisbane in 1853. This piece land was known to some as ‘Hope’s scrub’ before later becoming the Hopeville estate. An 1864 advertisement for land sales for ‘Hopeville’ described it as being, ‘…the richest scrubland in the colony’ and ‘unsurpassed for beauty of aspect and extensive view.’

Hope served in the Queensland Legislative Council during 1862-82, and lived as a landed aristocrat at Ormiston and Kilcoy, with a large house on each station. He was also a major figure in establishing the colony’s sugar industry. He died in Switzerland in 1894.
The Hopeville land was farmed by the Ruddy family during the 1870s-90s. John and Elizabeth Ruddy arrived in Brisbane from County Armagh, Ireland, with their eight children in 1863. Their daughter Elizabeth married Tom Magee (who later became a sexton at the cemetery) in 1866. Several members of the Ruddy family were laid to rest within the South Brisbane Cemetery.
The South Brisbane Cemetery was originally smaller than it is now and did not include this land, but by 1904 the cemetery was too full and so it was extended to incorporate the seven acres of the former Hopeville Estate.
Read more about Louis Hope in the Australian Dictionary of Biography.

Nearby ‘Areas of Interest