This is grave number 5B-141. These ‘areas of interest’ are marked on the entry signs in the cemetery. 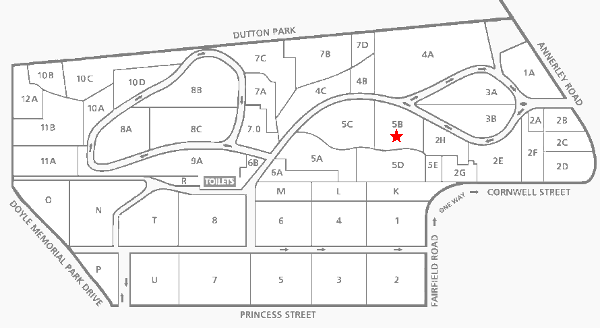 The Pearl steamer was operating as a Brisbane River ferry on the morning of 13 February 1896, after floods had forced the closure of the Victoria Bridge. The current carried her onto the anchor chains of another vessel and she capsized near the Queen’s Wharf with about 70 passengers on board. At least 26 people drowned, and some bodies were never recovered.

About 29 passengers drowned, and some bodies were never recovered. At least five victims were buried in the South Brisbane Cemetery, including Louisa Barnes (age 27) of Boggo Road; William Percy Hall (age 22) of Merton Road, Woolloongabba; Nellie Harper (age 40) of Russell Street, South Brisbane; soprano Grace Elizabeth Yorston (age 37) of Inkerman Street, Woolloongabba; and little Timothy O’Sullivan (age 9 years) of Balaclava Street, Woolloongabba. The body of Mary Renton (age 34), of Cordelia Street, South Brisbane, was never recovered, but her name appears on a family headstone in the cemetery, as does that of Mabel Marshall (age 15), who also never found.